Nobody ever got fired for buying Salesforce.

Wealthbox is the solution to low CRM adoption and insanely high expense.

12 Reasons Why Financial Advisors are Escaping to Wealthbox CRM

Wealthbox is easier to onboard users than Salesforce.

Unlike Salesforce, Wealthbox simply works out of the box. 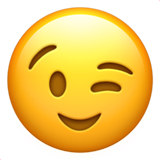 There’s no complex setup, no consultant, no salaried administrator, no paid-training, no hassle. Wealthbox provides sign-up-and-go simplicity, while offering full-featured, powerful CRM. It’s intuitive so you can start immediately, yet our customer success and support teams are here if you need us for anything from quick questions to live demos to jumpstart video tutorials. Data file migration from Salesforce to Wealthbox is easy - and free.

The Wealthbox team offers secure, free, and speedy data migration services when importing CRM data from Salesforce to Wealthbox. It’s actually a breeze and new customers to Wealthbox are often surprised how painless and quick it is to do with the help of our friendly specialists. Similar functionality, yet Wealthbox’s features are tailored for advisors.

What’s great about Salesforce is that it does everything. What’s horrible about Salesforce is that it does everything - and you’re going to spend lots of time and money trying to set it up and figure it out. And in the end it might not work, as low user adoption sets in from the complexity and fatigue of the CRM struggle. With Wealthbox, advisors experience a well-designed, intuitive CRM product with amazing features like the activity stream for team collaboration, the best integrated email-to-CRM feature of any vendor in the market, and interactive flows that purpose-built for financial advisors. "We switched to Wealthbox and have seen our advisors adopt CRM like never before. It’s simple to use yet powerful and helps our firm operate with efficiency."

The user-experience of Wealthbox is superior to Salesforce.

The team at Wealthbox has deep experience in CRM software design, and it shows in our product. From an elegant user interface to intuitive, time-saving flows that require fewer clicks, it’s a marked improvement over the complexity and bloat that many advisors associate with Salesforce CRM.

Example: One of the most frequent actions in a CRM is for an advisor to “add a note to a contact record.” In the Salesforce interface, it requires 7 clicks to add a note; in Wealthbox it takes only 2 clicks. When a team of advisors enters thousands of notes into a CRM over the course of a year, this efficient action in Wealthbox, like so many other user flows, saves advisors time. An RIA firm works more efficiently in Wealthbox than Salesforce.

A central feature of Wealthbox is the activity stream and its social design, where permissioned users can collaborate as a team to get work done with ease. The activity stream, which is like a private social network for an RIA firm, allows coworkers to monitor and comment on various CRM updates and notify other users of special activity involving contacts, tasks, workflows, and events. (And the new fly-out panels adjacent to the stream are super efficient!)

The social, collaborative design throughout Wealthbox makes it better than Salesforce to communicate with coworkers to run an advisory practice. 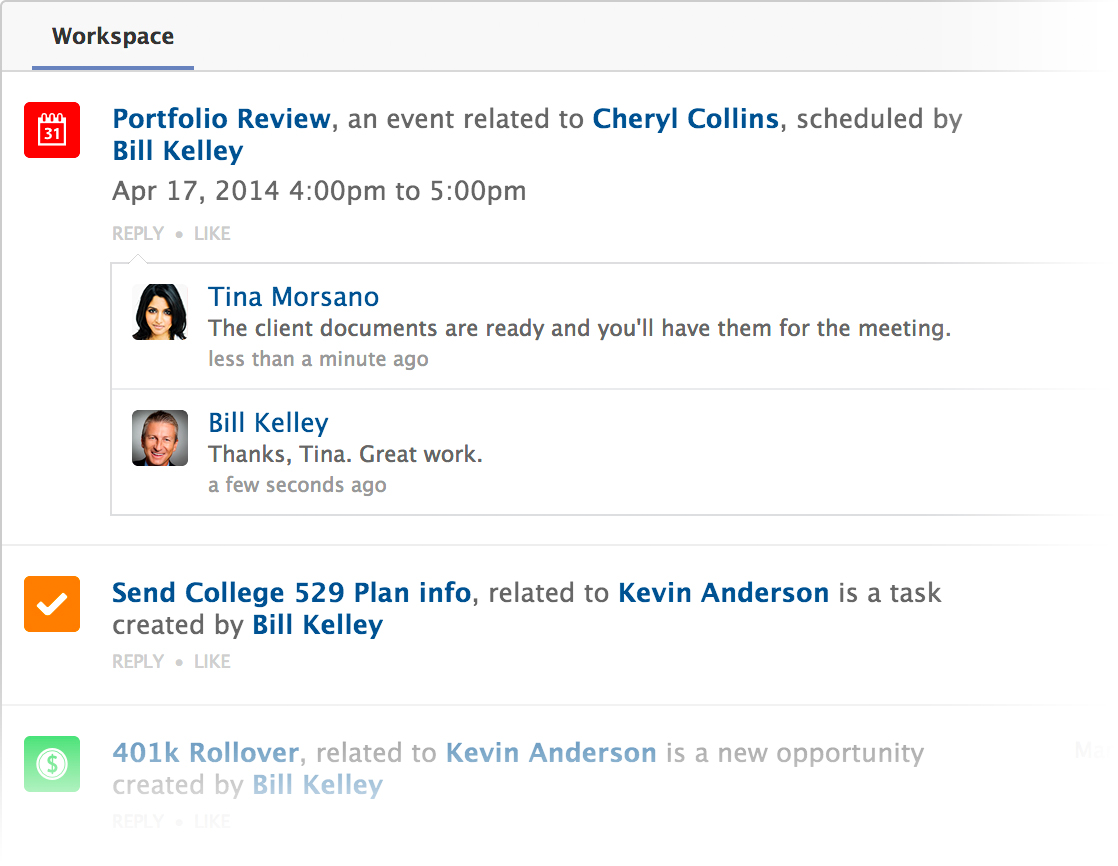 "The collaborative features and ease of use in Wealthbox are incredible and have helped our firm grow. We’re glad we switched to Wealthbox."

Wealthbox Mail is a complete email experience for financial advisors. Purpose-built for the way advisors work, it combines client relationship management with a familiar and powerful inbox, embedded in Wealthbox. Unique CRM-to-email actions help advisors become super productive. Simply put, Wealthbox has a much better user experience in the fusion of CRM and email than Salesforce.

Salesforce requires training, Wealthbox does not.

Wealthbox's API is made for RIAs, and it's better than Salesforce's.

The Salesforce API is incredibly complex with thousands of endpoints, many different authentication methods, confusing documentation, and difficult to understand based on a given Salesforce version. Salesforce has built-in, strict limitations about how many API calls can be made per user, but they're more than willing to sell you additional licenses to grant a higher limit.

Wealthbox’s API - designed for the advisory business - is simple for developers to integrate with their applications. It’s a fully documented RESTful API that allows deep integrations to the most essential components within Wealthbox: Contacts, Notes, Tasks, Events, Opportunities, Workflows, Projects, and Reports. On average, for instance, developers build a contact sync in fewer than 2 weeks, and many integrations take even less time. The Wealthbox Mobile app provides you with the tools you'll need to run an advisory business on-the-go. Wealthbox includes full-featured mobile apps across iOS, iPad, and Android meaning that you have all the features you know and love from the web-app, designed with a simple and easy-to-navigate mobile interface.

Salesforce, in contrast, in trying to be all things to all types of business people, has a much more complex experience in their mobile app. From the initial onboarding process to ongoing support, team Wealthbox is with you every step of the way. Our assigned specialists get to know our customers in a way that a massive firm like Salesforce, serving all different types of industries, simply can’t do. Our advisor customers get individual attention from our support team, who understand the advisory business and solve issues when you need help. "The support team at Wealthbox was super helpful in our CRM data migration, with friendly and fast service."

Wealthbox is less expensive than Salesforce.

Beyond the less expensive Wealthbox plan pricing of $45 - $79 per user/month, there are many other costs associated with Salesforce that aren't readily apparent, making Wealthbox waaaay less expensive. 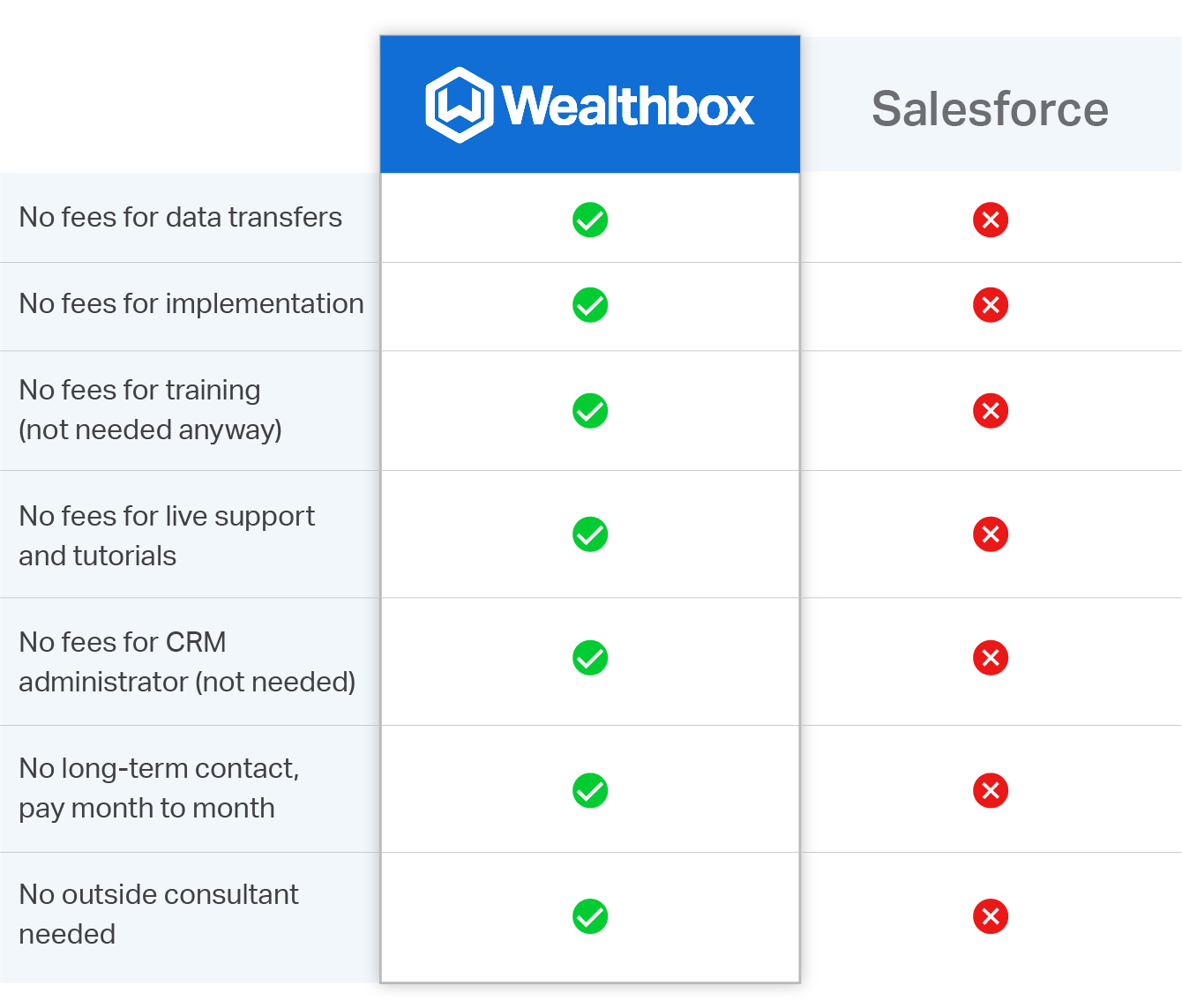 It’s a simple route. There’s light at the end of the tunnel. Let’s do this!

Schedule a 1-on-1 demo with Jomin, your guide to Wealthbox features and benefits. Explore the features of Wealthbox to determine if it’s right for your firm. We’re here to answer any questions. Amber will assist you in transferring your CRM data file from Salesforce to Wealthbox. It’s simple and quick - and free. Get a Demo Start Free Trial